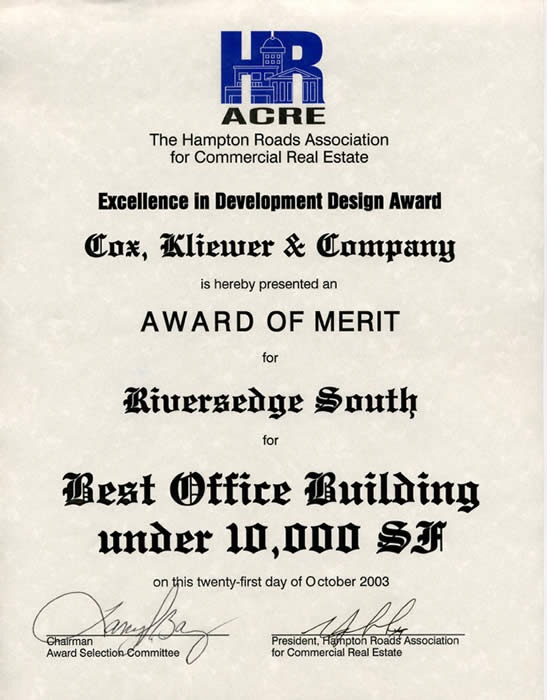 The first phase of a two-building commercial development, Riversedge South is a 6,900 sf two-story professional office building. The building site, 5.4 acres on the south side of Virginia Beach Boulevard adjacent to London Bridge Creek, a branch of the Elizabeth River, posed a myriad of design challenges, all of which had contributed to the property never having been commercially developed. Though the land area is more than five acres, the buildable area is a small wedge of 1.5 acres, bounded along the east and south sides by the creek (and therefore Chesapeake Bay Preservation Act (CBPA) setbacks), and to the west by a power easement and Eureka Park, a long-established neighborhood of single-story, single-family homes. In addition, the land itself had been used as a deposit site for paving and concrete debris during the reconstruction of Virginia Beach Boulevard in the late 1980’s; the bearing capacity of the soil therefore required pilings for any building construction.

Our solution involved a total development of two Class-A office buildings, both two-story, which blend with the scale and nature of the surrounding structures. Riversedge North, soon to be built, will be 10,450 square feet in size. Paramount among the developmental issues was the CBPA requirements. It was decided that the success of the Project would be the use of the environmental and surrounding area issues as the design premise: Develop a low-scale, high-quality property, which respects the environment and fits comfortably into its neighborhood; much as though the development was gently lowered by a helicopter as opposed to being thrust in by a bull dozer. The CBPA requirements became a strong element of the aesthetic solutions. The buildings are located as far north on the site as possible, thereby leaving as much area as possible in a natural state. The land development includes a dry BMP at the south end, which has already re-grown itself with indigenous vegetation and is therefore transparent. Parking is located on the west and north sides of the property, where, in addition to the natural landscape buffers in those areas, the buildings will be as far as possible from the residential structures, and take advantage of the waterfront views. The parking layout reflects the shape of the site, the paving materials and details were selected for their visual softness, and the lighting is designed to softly throw light away from Eureka Park.

Our landscape design uses the very character of the existing vegetation as a basis for the palette of plant species, which tie the building to the site, and are indigenous to the area wherever possible. The staggered two-building layout enables a variety of small green areas between them, and affords views of the water from the arrival “roundabout” area. In the immediate vicinity of the buildings, the natural waterfront vegetation transitions to a more manicured, finished appearance, still using hybrid forms of marsh grasses, stone, and locally-prevalent plant species.

The buildings themselves are firmly tied to their surroundings, yet reflect a modern, approachable image in commercial development. The low-scale, pitched roof forms utilize lightweight materials and forms, which are comfortable in their residential-to-commercial location, and whose colors are taken from the waterfront environment. The open areas of the roof align with the second floor windows to allow natural light into the building and thereby minimize energy usage. The interior layouts were designed to make optimum use of the views to the east and south, including broad expanses of glazing, and second floor waterfront decks. The block-paved arrival roundabout area between the two buildings provides an elegant, upscale feeling of “place” that is welcoming, functional and classic.

The Riversedge Office Park sets a high level of design excellence for Virginia Beach in small-scale commercial office development. It illustrates the results that can be achieved through sensitivity to the environment and the surrounding area, and the understanding of what is appropriate in facilities design where form does indeed follow function. A site, which was long thought not suitable for development, has become an asset to the community and a benefit to the City at large.