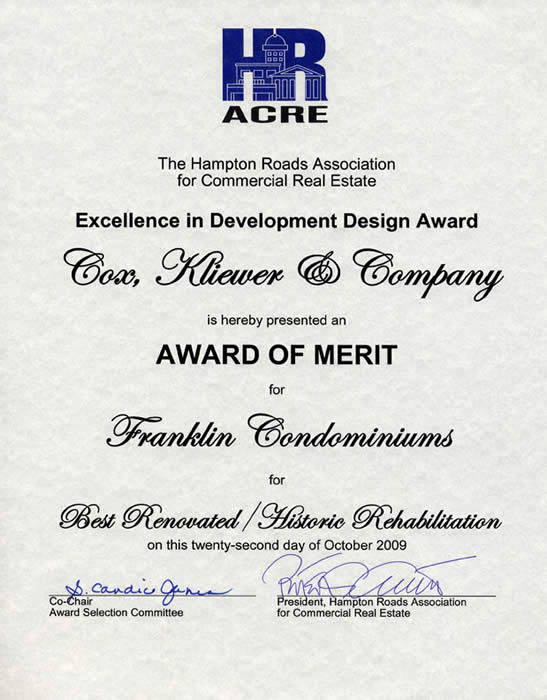 The building now known as the Franklin Condominiums is actually comprised of three structures built over the course of ten years in the early 20th century for retail and office occupancies as the City of Norfolk expanded it’s downtown region north of Brambleton Avenue. The most recent occupant was the City of Norfolk Social Services Department, which combined and occupied all of the structures until 2005. No Construction Documents of the original or combined buildings were available.

The Franklin now offers nineteen luxury condominium units with seventeen unique floor plans ranging in size from 1,435 to 3,820 square feet, an enclosed courtyard with a water feature, and a total of 3,960 square feet of ground level retail space in two streetfront occupancies. The project included a re-zoning of the property for the new mixed use.

The design demands for this property were unique in that each of the three original buildings had different floor elevations on all levels, and as much as 18” on the ground level. This necessitated the removal of all first floor slabs, inserting of controlled fill, and re-pouring to create uniform floor levels. Additionally, each of the three had different structural and egress systems. A majority of the construction was bearing wall masonry, necessitating underpinning and the addition of new structural members to provide needed clear spans. The need to locate new windows that provided a cohesive pattern on the exterior also required removal of exterior wall masonry and the insertion of steel lintels. The street noise inherent at the Brambleton Avenue location required double-laminated glazing and the use of masonry and EIFS, to provide a very quiet building on a very noisy corner.

Beyond the constraints of the existing conditions were those of a complex renovation on a downtown site bounded by streets on two sides; the City right-of-way is also at the building face on those sides. Negotiations with the City allowed the relocation of planting beds from the curbside to the building face and the addition of lavish landscaping there and in the interior Courtyard, which provides a pleasant and unexpected overlook for twelve of the nineteen condominium units.

Owners and guests arrive beneath a canopy at the northeast corner of the building, then into an intimate contemporary Lobby paneled in Green Eucalyptus. Mail and package receiving are accommodated immediately off the Lobby. A simple four-leg corridor system, punctuated with graphic carpeting, unit entry alcoves, and dropped indirectly lighted ceiling planes, connects the upper floors of the building and the two courtyard entrances. The design brief also required that the building be divided into four quadrants, each with its own vertical circulation that provided access to no more than two units on an upper floor for privacy. Two two-story penthouse units on the west side of the building also include outdoor decks of approximately 400 square feet each, with sweeping views of the downtown area.

The new façade of the building takes its cues from old photographs in the archives of the Virginian Pilot newspaper, replicating many of the details and materials found therein, and preserving the Art Deco period glass block radial glazing at the southwest corner. The building name was taken from that of the largest of the three buildings, the retail and office structure that occupied the Brambleton Avenue side of the block. The terrazzo floor panel at the entrance to that building was relocated to the Lobby entrance of the new one.

We are proud to have had the opportunity to work on such a unique adaptive reuse project, and to be a part of the revitalization of an important corner in downtown Norfolk.